Mizzou Football: A Third of Players, Two-Thirds Coaches To Be Arrested at Current Rate 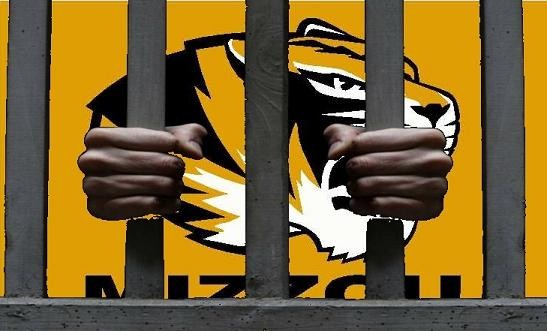 Wait - ANOTHER Mizzou football player got arrested? Before the season has even started?

Yes: Derrick Washington -- the senior tailback who scored 10 touchdowns and rushed for 865 yards last year -- turned himself in to Boone County authorities yesterday right after being charged with felony sexual assault.

Wow. Let's look at who else has gotten Mizzourah-rrested before opening kickoff:

If four players and one coach get arrested before every subsequent game, then here's the tally by the final contest against Kansas:

Hope we have some depth this year. (gulp!)

According The Maneater in Columbia, head coach Gary Pinkel made this assessment:

"We've done a good job of building a reputation for running a first class discipline program, so I'm embarrassed that we've taken a few of these hits," Pinkel said. "The system works, we just had some mistakes, and I'm responsible for that."