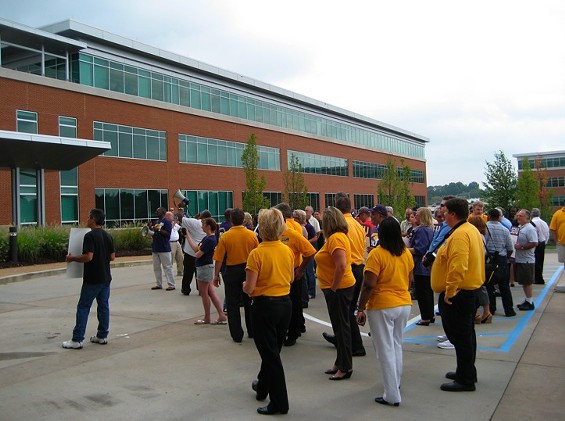 For the last four days, two massive tour buses carrying 50 unionized employees of Express Scripts, Inc.'s Bensalem, Penn. facility have been rolling toward St. Louis. Monday afternoon, they gathered outside the corporate headquarters of the pharmacy benefit management company to protest the pay and benefit cuts they face.
"I think George can hear us loud and clear, right?" shouts a man with a megaphone, pacing the sidewalk in front of the crowd, referring to Express Scripts CEO George Paz.
A gathered crowd of about 70 people, about a dozen in purple SEIU shirts and another 20 sporting goldenrod UFCW shirts, chanted outside the building for about 20 minutes. One of their chants: "No contract! No peace! No benefits! No peace!"
Another: "We are the union, the mighty mighty union!"
A man and woman wearing badges identifying them as Express Scripts corporate security paced near the crowd, videotaping the protest.
SEIU Healthcare, which represents 950 workers at the Bensalem, Pennsylvania, facility, organized the workers' pilgrimage to the Midwest. In a press release sent ahead of the rally, the union said its goal is to "expose [Express Scripts]'s threats to close down their operation if they don't agree to substantial cuts in pay and health insurance and pension benefits."
The buses traveled cross-country adorned with banners declaring the company "America's Most Wanted Job Killers," and said they intended to serve CEO Paz with an "arrest warrant."
Express Scripts' second-quarter financial statements, released July 28, show a gross profit of $777.7 million, up 33 percent from the same time last year. The company's net income for the first half of this year is $550.1 million, up from $406.7 million at the same time last year.
Thom Gross, Express Scripts' senior manager of communications, told Daily RFT in an email that "labor costs in Bensalem are the highest in our system by a significant margin. We have asked the Bensalem union to agree to some adjustments that would bring that facility in line with our other facilities nationally. These adjustments are essential for us to continue to make the use of prescription drugs more affordable, to stay competitive, and to keep these jobs in the Bensalem community."
Gross says that the Bensalem workers' wages and benefits "compare very favorably" to other workers in the area.
While three lanyard-wearing Express Scripts workers gazed down from a balcony at the crowd of protestors, however, and her peers waved signs and chanted, Bensalem worker Pam Rogers said she and the other workers were angry that ESI was turning record profits during a recession, but asking workers to take cuts.
"There's plenty of work for all to go around. We just want a fair shot, we just want to keep a job," Rogers said. She's been a data entry tech for Express Scripts for seven years, and is the local union chapter president. "All we're asking is that they spread the wealth and let some of us have some of it...They're not hurting for money. They don't need to cut costs. We want to make concessions and we want to work with them, but they're unreasonable in what they're asking for."
If the Bensalem facility were to be closed, 1,200 jobs would be lost.
The majority of lower-level workers, who make up the bulk of Express Scripts'\ workforce, make between $8 and $10 per hour, Rogers said. She wouldn't say how much higher-end workers make at the company.
"I don't know, ask George Paz," she says.
The protestors filed back to their buses around 2:20, chanting "We'll be back." Police looking on said that they had not been forced off the property, but left on their own.