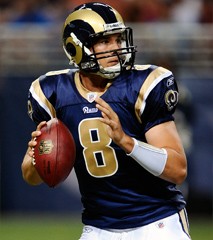 For a moment last night I thought I was watching the 2008 Big 12 Championship game -- the one in which the soon-to-be Heisman Trophy winner Sam Bradford led his Oklahoma Sooners to 63-21 trouncing over Mizzou.

Okay, so perhaps Bradford wasn't quite as dominating last night in his first pre-season start for the St. Louis Rams. Still, the rookie quarterback looked damn good playing against one of the best teams in the league -- the New England Patriots.

Bradford completed 15 of 22 passes for 189 yards and two touchdown receptions all adding up to a 125.0 passer rating. The Rams' No. 1 draft pick played the entire entire first half, leading his team to the the locker room with a 20-14 advantage.

Fellow rookie quarterback Thaddeus Lewis (Duke) also looked good for the Rams. Lewis went 11 for 14 for 120 yards and threw one touchdown and an interception as the Patriots clawed their way back under QB Tom Brady -- who connected on a huge 60-yard bomb to Randy Moss and a couple touchdown throws to tight-end Rob Gronkowski.

The Patriots were up 35-33 in the finals minutes when the Rams drove down the field and Josh Brown kicked a 37-yard field goal as time expired. Rams win 36-35.