Yesterday the Jefferson County Sheriff's Office sent out mugshots of the seven people arrested in a meth-lab seizure last week.

One of the photos caught our attention here at Daily RFT. It's the picture (right) of 22-year-old Ashley Hicks of Potosi, Missouri.

Is it us, or does it look like Ms. Hicks is not wearing a shirt in this photo?

Now that we mentioned it, we've noticed a lot of mugshots coming out of the Jefferson County Sheriff's Office that seem to be taken without the subject wearing a shirt. (Take for example the photo of Jake West, the drunken teen accused of shooting a house guest with a shotgun earlier this summer).

So, what gives? Curious for answers, we called up Jeff Co. Sheriff Oliver "Glenn" Boyer. 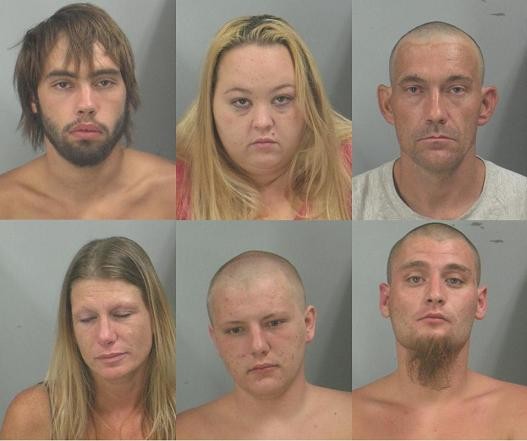 Daily RFT: We noticed that several of the people arrested in last week's meth bust (above) aren't wearing shirts, including one of the females -- Ashley Hicks.

Boyer: And let me guess. You want the bottom half of that photo?

Well, if you've got it. But seriously, is she wearing a shirt?

I think she was wearing a tube top. But I'm not sure. I know that if we arrest a woman and she's not clothed, we'll give her a blanket to cover up.

But not the men?

Generally, no. If we arrest them without a shirt, they stay that way through the booking process. Then we give them a uniform.

P.S.: This reminds me of a theory I've formed after watching countless episodes of the show COPS. If you're a criminal, the worse thing you can do is go back to your lair and remove your shirt. It's then -- and only then -- that the cops come bursting through the door and arrest you.

P.P.S.: And what is it with criminals always removing their shirts? I'll be watching an episode of COPS that was filmed in Minneapolis in January and the criminals are always arrested without shirts. Is there something about crime that increases your core body temperature? Or is just the drugs?