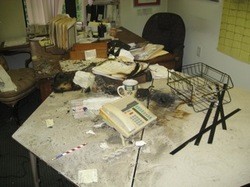 Finally some context! We here at Daily RFT have been inundated all day with emails and comments regarding last week's story on the firebombing of Russ Carnahan's campaign headquarters. The messages all have a similar theme, demanding that I apologize for speculating that the suspect in the case must have been a Tea Party member based on the following three criteria: He's white. He's 50. And he's bat-shit crazy.

Now it turns out that right-wing blogger Gateway Pundit says he's identified the man police arrested and released last week without pressing charges. According to the Gateway Pundit, the suspect is Chris Powers, a former volunteer and briefly paid canvasser for Carnahan who was upset for not being paid for work.

Today I contacted the St. Louis police. They tell me there has been no new developments in the case since last week. Meanwhile, Carnahan's camp tells me that the congressman will make a statement on the fire bombing today.

Stay tuned! Oh, and to everyone who's written in today calling for my head, remember this: In last week's post I retracted saying that the suspect was a Tea Party member. Compared to other Tea Party acts -- burning Carnahan's image in effigy and placing a coffin on his front lawn -- throwing a fire bomb through his window was just too sane of an act for you.