In Case You Don't Feel Like Reading All Those Arch Grounds Proposals...

...our friends at Urban STL have taken the trouble of reading through them all and providing critical summaries. We're really grateful, too: Some of those proposals are long. (SOM-Hargreaves-BIG and your 337 pages, we're looking at you.)

Critiques of all five proposals are up on the Urban STL website. Writer Alex Ihnen breaks down each proposal by element: Kiener Plaza, the Old Courthouse, I-70/Memorial Drive, Museum of Western Expansion, the Old Cathedral, the north end, the south end, cross-river connections, and the east side. (Well, now we know why those plans are so damned long.) Final judgments are based first on feasibility then on excitement. 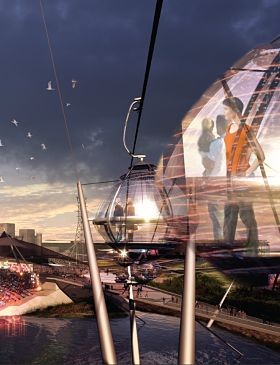 The Behnisch proposal -- the one Chad has already approved as being the most Dali-esque -- scores for being both the most exciting and the least feasible. (Those floating things, by the way, are glass gondolas suspended from cables that will carry you across the river.) Their presentation narrative, however, features actual characters and is the most fun to read.

Conversely, MVVA takes the honors for being the most feasible and least exciting. As Ihnen puts it, "I'm falling asleep and it's not (only) because it's 1:00 a.m. and I'm looking at 'JNEM East Wetland Preserve: Technical Notes' for the fourth time."

PWP+Foster+Civitas gets props for hewing most closely to Eero Saarinen's original vision for the Arch grounds, but that's a backhanded compliment at best. Ihnen again:

The seeming slavish adherence to Saarinen's original plan seems at once boring and a cunning attempt to differentiate PWP from the crowd, kind of like bidding $1 on a speedboat and French Riviera vacation on the Price Is Right. Perhaps the others teams have overreached.

Weiss-Manfredi's plan is the most ambitious and is the only one, Ihnen says, that proposes any real change to the Arch grounds themselves; he finds that exciting. "Rising landforms" will connect the grounds to the riverbank, where riverboats can dock. 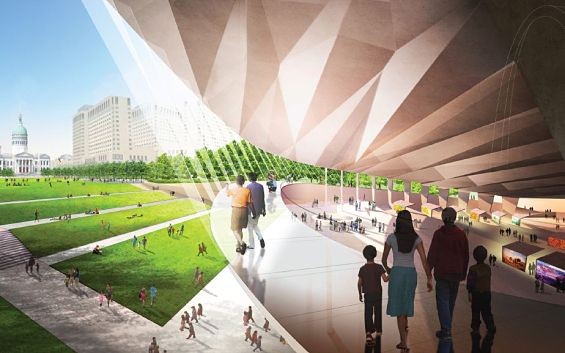 "The uninterrupted pedestrian access to the grounds across I-70, the two-story recessed museum entrance, trainspotting cafe, riverfront land forms and new pedestrian bridge together offer the most substantial changes to the signature elements of the park. The dramatic new museum and pedestrian bridge serving a clear circumnavigation of the park alone are enough to hope for the design to become reality."

Weiss Manfredi's main competition, were Ihnen selecting the designer of the new, improved Arch grounds, would be Chicago-based SOM-Hargreaves-BIG. SOM's plan which would make the Arch grounds resemble Millennium Park sans Bean and fountains with spitting people. Just take a look at the "Magic Carpet," which sports the same sort of curvy roof as Millennium Park's Jay Pritzker Pavilion. This is not coincidental: SOM was Millennium Park's original architect, before the city brought in Frank Gehry and the other big guns. It's also not much of a criticism: Millennium Park is undeniably awesome.

But back to the Arch grounds. SOM's plan provides for a multi-use space at the south end of the grounds, including basketball courts, a skate park and a soccer field and an expanded visitor's center with a cafeteria, exhibition space and library archives. It also has proposed a floating lap pool in the Mississippi (a suggestion Ihnen finds slightly overambitious) and urban development centered around the Metrolink stop on the east side.

Even though the final critique has yet to be posted, SOM is leading in the user poll. What do you all think?