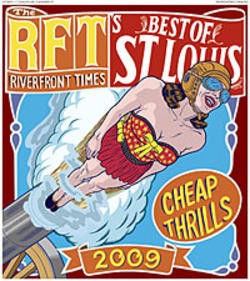 Every fall, as you, our devoted readers, surely know, Riverfront Times puts out a massive Best of St. Louis issue that contains more than 400 listings for the best stuff in St. Louis.

Earlier this summer, Max Bemberg, Ben DeMeyer and Alex Luft, a trio of St. Louisans, decided that Best of St. Louis should be a year-round thing. They set up a website, www.bestofstlouis.com, and began posting reviews of what they considered the best places in town and, in a series of mini-polls, asked readers to contribute their opinions.

After they received the letter from Suskin, they posted the news of their legal troubles on their website. Then, as they wrote in "Goodbye, cruel world," their final post, "in an odd twist of timing we were hacked the next day, and the post criticizing our legal antagonists was gone (along with everything else on the site)."

Now, are we saying that the RFT or their corporate overloards [sic] at Villiage [sic] Voice Media hired hackers to attack our site so they wouldn't be faced with the bad press? No! We'd never say anything like that! That would be libelous and it might not even be true.

But it boils down to this: faced with the prospect of trying to resurrect our site from its hacked and smoldering ashes only to tear it down by September 1st to comply with a legal order we have no resources to fight, we said "fuck it."

Suskin maintains that neither Riverfront Times or VVM had anything to do with hacking the site and that the corporation was within its rights to ask Best of St. Louis to stop publishing since it has registered the name Best of St. Louis with the United States Patent and Trademark Office.

"I admire their pluck," he says, "but they're either ignorant, or thieves stealing our valuable intellectual property. On the business side, it's considered a valuable enough asset that we'll enforce and protect it. That's the whole concept of trademark."

In their goodbye note, the Best of St. Louis writers told their readers to "call the RFT and yell obscenities at them for a while." So far, though, nobody has done so.