August 20, 2010 at 1:10 PM
comment
The union leader accused of passing out pro-KKK business cards on a St. Louis job site didn't just get booted from the job, as we reported this morning -- the union has just confirmed that they've also removed him from a leadership role. 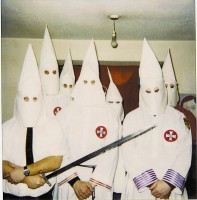 The man was not a board member of the Local 53 chapter of the Laborers International Union of North America, or LiUNA, as Daily RFT previously reported, but rather that chapter's Sergeant at Arms.

Gary Elliott, business manager for the Eastern Missouri Laborers' District Council, confirmed this morning that union leadership demanded that he resign from his post -- and that the man complied immediately.

"LiUNA stands against racism in any form and from any direction," the union said in a prepared statement. "We are all about fairness...for all workers."


The statement also noted LiUNA's diverse roots. (The union was established by immigrant workers in 1903.)

"Safety, compensation for labor, and decent, respectful treatment of workers were some of the original planks of LiUNA's founding, and remains so to this day! LiUNA is an organization of immigrants; the truest measure of what a melting pot of diversity should be in the construction industry, bar none!"

A sergeant-at-arms typically has some sort of security function for union meetings such as checking members' union cards upon their arrival.