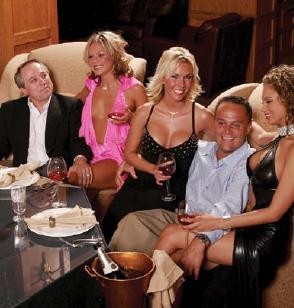 The first thing you notice in the VIP dining room of the Penthouse Club in Sauget are the chairs. Actually, scratch that. The first things your eyes adjust to in the near pitch-black darkness is the stuffed lion, the moose bust over the fireplace and the stone grotto in the corner. Then you notice the chairs.

The seats dwarf the tables. Michael Ocello, president of the VCG Holdings (the publicly traded company that owns the Penthouse Club and 18 other adult nightclubs in 10 states), tells me that the company had the chairs specially made.

"The arms are reinforced and have a cushion perfectly sized for a woman to take a seat," says Ocello, who has our server -- a petite blonde named Tiffany in fishnet stockings and a corset -- demonstrate. "See. This way you can have two women seated with you and they're not on your lap. Which can be fun -- until your legs fall asleep."

But Ocello didn't invite me to the Penthouse Club today to discuss furniture. No, he has something much more interesting to report: the study that found strip clubs like his can be good for your health.

"We were very surprised by the findings," says Ocello, whose VCG Holdings commissioned Empire Research to conduct the study. "Besides the obvious -- beautiful women -- we wanted to know what attracted men to adult clubs. We always knew that our clubs made men feel good, but we didn't expect the researchers to come back with medical findings that our clubs can also be healthy for you."

Then again, if you think about it, it makes sense, says Ocello. "As a society, 54 percent of us feel overwhelmed with work. We only have 16 hours or so of leisure time a week and more and more of that is interacting with people via Facebook or the Internet. We're social creatures. We need human touch, human contact."

The study suggests that strip clubs can lower Cortisol, the so-called "stress hormone" that can lead to heart disease, while also boosting Oxytocin, the so-called "love hormone." Moreover, strip clubs tend to increase testosterone which naturally declines as men age.

"They've done saliva tests that show that men's testosterone increases when they're surrounded by beautiful women," says Ocello. "Why is that? Because there's no fear of rejection. The women are going to talk to you. They're going to flirt with you. That's how it works. The question is: would you rather go to the gym and do push ups to increase testosterone, or spend her time here surrounded by beautiful women?"

So, how long til doctors begin prescribing a trip to the strip club to their patients?

"I don't know, but if you look at the footnotes to our study, it comes from them," says Ocello. "Our research is from the medical community!"

For more information (and a free pass to one of VCG's adult clubs) check out healthystripclubs.com.