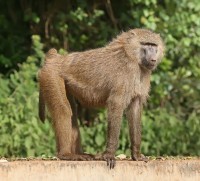 UPDATE: Kudos to Daily RFT's very smart reader "Shelley" -- this thing was, indeed, a hoax on the part of a schoolgirl. Apparently, kids will do anything for attention these days, to the point of downloading photos from nature websites and passing them off their own -- thereby unleashing hapless adults with butterfly nets onto the streets of Florissant.

See this story from Fox2 News for the latest.

A local resident called police this morning after espying a "chimp" running loose in a common area behind homes in her Florissant neighborhood, according to wire reports. There have since been multiple sightings; police are now on the prowl, as are zoo officials. (Since the animal is not believed to be an escapee, they've presumably been summoned for their monkey-catching expertise.)

And, as KDSK reports, one woman managed to get a picture. Her photo makes it clear that the animal in question is actually a baboon -- and, for the record, this baboon doesn't like being told to smile.

Windsor said she was awoken this morning by her barking dog. When she looked out into her yard, she saw the baboon standing under a small tree in her yard.

Windsor decided to take a picture with her cell phone. The phone says "smile" when you snap a picture. The baboon became agitated by that command and ran off to play with a volleyball.

But the funniest part of the story may be this description of local residents, per the Post-Dispatch:

In the Florissant neighborhood where people were searching, the scene this afternoon was chaotic. One woman, who did not want to be identified, said she owned a monkey. She made baboon-like noises and scattered Lays potato chips and Cheetos on the ground.

Another woman who said she owned a monkey was walking around with a net, hoping to catch the loose animal.

Seriously, just how many monkey owners live in Florissant, anyway?