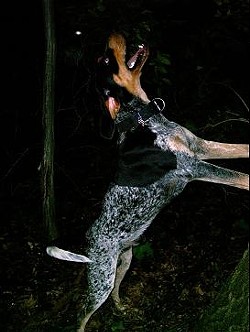 The two go raccoon hunting (treeing the animals, but not killing them) about 200 times a year, tromping through the woods late at night in search of their ring-tailed prey.

So tight is the bond between man and his best friend, Gamboe can reportedly hear Threat barking for him a mile away. To keep Threat strong for their near nightly coon chases, Gamboe augments the dog's diet with fish-oil supplements and electrolytes.

And so it was that Gamboe and Threat were out on a hunt this past Sunday night when the GPS signal on the dog's collar went dead.

Another dog out hunting with Gamboe and two of his friends was also missing. For hours the men searched the pitch-black woods for the canines. Finally, around 3 a.m., they discovered the other dog, soaking wet and covered with mud.

As the Alton Telegraph details today (in a superb story), Gamboe returned to the scene around daybreak the next morning to continue his search for Threat. Eventually, Gamboe stumbled across what appeared to be a small cave opening in the earth. He crawled in, moving slowly on his belly some 75 feet before he could go no further.

Back outside the cave, Gamboe left some of his clothing at the opening, hoping that if the dog were trapped in the cave it would catch scent of the garments and come out. Gamboe returned several times a day to check on the cave. Finally, on Wednesday, he heard Threat's yelp from deep inside the hole.

Around noon that same day, Gamboe's wife found an online forum for area cave explorers and left a message for help. By 6:30 p.m. Wednesday the cavalry arrived in the form of seven spelunkers from Illinois and Missouri. It was a female in the group -- Kristin Nicolussi -- who was tiny enough to descend far enough into the narrow cave to reach Threat. The dog's head was wedged between a rock and the low ceiling of the cavern.

With some maneuvering, and a few whimpers from Threat, Nicolussi was able to free the dog, which left the cave -- tail wagging -- to be reunited with his tear-soaked owner.