​The Wedding Show, held at America's Center downtown last Sunday, is like the worst wedding you've ever been guilted into attending by your coworker, distant relative or wild-eyed, frantic-for-a-date single friend.
It's crowded and noisy, sweltering and poorly decorated, and populated with people you don't know -- and have no desire of getting to know. Worst of all: It's not even open bar.
Organizers of the St. Louis Bride & Groom Magazine-sponsored show estimate that around 1,200 brides, grooms, mothers of the bride, bridesmaids, sisters and friends were herded into the warehouse-style showroom, populated by row upon row of wedding vendor booths.

So here's what it's like to be one of them:

After paying $8 to get in and being slapped with an ovoid sticker proclaiming your role ("BRIDE!" screamed the sticker the majority of women wore, in white script drowning in a neon pink background), you are funneled into the show space. The dull industrial roar inevitable in large concrete-and-steel rooms competes with a black-clad string quartet's rendition of the bridal march, playing over and over and over again.

​A white Hummer limo flashes its brights to the right, a sign leans against the dashboard proclaiming it's "all about YOU!" and dazed fiances sporting stickers printed with a tuxedo shirt and bow tie ("GROOM!") sit inside, staring at the TV screens dropped down from the ceiling liner, palms flat against the gray leather seats until their wives-to-be call them again.
"My mom can whip out a bridesmaid dress in, like, two days," says one BRIDE! sticker to another, gazing at a bridal shop's booth.
"Oh. I'll probably just go to Nieman's," the other sniffs back, and they disappear into the milling herd.
The rows of vendor booths takes up the majority of the space: the house caterers, the dressmakers, hotel representatives, tourism representatives for the Bahamas, chair and linen rental companies, a fully-assembled spray tan tent, cater-waiters, tooth whitening and Invisalign braces, "wedding sitters" reception-childcare providers, jewelry designers, florists, bachelorette party venues, wineries, photobooths, "pre-bridal fitness specialists," department stores showing off place settings, registry services, baby clothes. Everything you could ever need for a wedding, reception, honeymoon, new life is standing behind its own booth, everything except maybe a bank -- pre-approving loans to help finance the happily-ever-after that everyone here is striving for.
"Are you a homeowner yet!" A woman with dark roots and severe eyeliner jumps out from behind her table, waving a brochure, hoping to lure in any of the young women with a binder full of wedding plans clutched to their chests.
And then there's the fashion show, since everyone knows it's not a wedding without the dress. Or the mother of the bride's dress. Or the bridesmaids' dresses. Or the ringbearer's tiny tuxedo. Or the ... you get the idea. Accordingly, the show lasts nearly an hour, trotting out the same models to strut the runway, pose, pose, turn, and walk back toward the backdrop, emblazoned with "Just Married!" 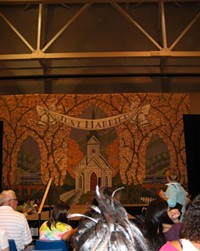 ​Probably more exciting than the runway itself is the reaction of the audience. More specifically, the moms, and even more specifically, the moms' reactions to the male models, there, it seems, for the sole purpose of guiding the female models out with a hand on the small of their back or their arms looped through their crooked elbows, winking at the crowd (hundreds of women almost literally in heat in the humid warehouse, plus a few awkward fiances) and throwing something into the crowd. Shirts, cowboy hats, candies. One woman is hit square in the face with a cowboy hat, but still looks ecstatic as she immediately plops the hat atop her perm, daughter beaming up beside her.
"THAT ONE!" a heavyset, middle-aged black woman stands up and mouths across the runway, presumably at her daughter or friend. She's pointing at a male model with a brunette fauxhawk, wearing a red cummerbund and walking in beat with the Michael Buble song blaring from the speakers. She tosses a thumbs up and sits down, fanning herself in an "oh my stars" manner.
After the fashion show, brides and their mothers and various hangers-on begin to disperse, clutching swag bags full of brochures and complimentary pot holders, business cards and bite-sized candies, still proudly wearing their BRIDE! stickers.
The vendors finally begin to rest and eat, collapsing into the white-swaddled chairs near the pretzel and soda concession stand in the corner. The chairs and tables are sponsored by a party rental company, and each dressed-up chair sports a mint green mesh bow across the back and the company's brochure on the seat.
"I think people are tired of not spending money," says a woman who manned a dress shop's booth, picking at a caesar salad and chatting with a venue rep from a reception hall. "I think next year, this show could be even better."

Apropos of Nothing Postcards from the Edge