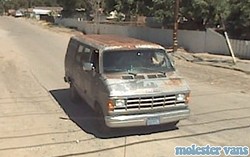 Jurors in St. Clair County are deliberating right now over a curious case in which a man has been charged with abduction -- even though he never abducted his alleged target.

Todd Dittenber, 49, of Collinsville was arrested in January 2009 on charges of attempting to lure a 15-year-old girl into his van. As the Belleville News-Democrat reports today, Dittenber was driving near the nudy bars of Brooklyn, Illinois, on a Sunday morning when he asked a girl walking down the street to get in his van.

The girl was on her way to church. Dittenber allegedly asked the girl three times if she wanted a ride. Each time the girl said, "No, thank you," and never did enter the van.

Those items -- and his persistence in soliciting the girl for a ride -- was apparently enough for prosecutors to charge him with child abduction.

Yesterday Dittenber's attorney, Douglas Forsyth, told jurors that his client merely thought that the girl was a prostitute -- and didn't know her age. Besides, said Forsyth, how do you expect people to act in Brooklyn?

"When you hold out a community as an open bazaar for sex, when the village's founding fathers and founding mothers allow sex clubs in their communities, then your children aren't going to be safe, especially when they don't look like children," Forsyth said.

The jury did not hear a similar misdemeanor complaint against Dittenber accusing him of approaching juveniles in Highland, Illinois. Dittenber faces a trial on that case next month.