Five Cardinals You Don't Ever Want to Piss Off 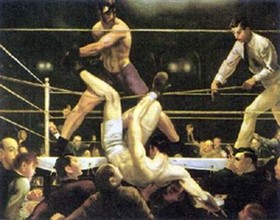 So the great fracas that was the Reds/Cardinals series is over, with our boys in red roundly thumping their boys in red and taking over sole possession of first place in the National League Central.

The series was an outstanding one, full of drama and heartbreak and brilliance on both the offensive and defensive sides. The pitching came through as well, highlighted by seven innings of shutout ball by the Cards' ace Adam Wainwright. Best of all, Brandon "Little Bitches" Phillips was held largely in check in the series, despite the noticeable failure of the Cardinals to put a pitch in his ear.
However, the play on the field, while enjoyable in its own way, certainly, is not what we will all most remember about this series. No, the most memorable moment of all came before Jaime Garcia threw his first pitch of the night, when a confrontation between Yadier Molina and the aforementioned Mr. Phillips at home plate escalated into a full-blown brawl, complete with former teammates at each other's throats and Johnny Cueto doing his best Liu Kang impression. (Liu Kang? Mortal Kombat character? Had a bicycle kick special move? Anyone?)
Now, I've watched the tape of the fight several different times, as it's been replayed ad nauseam on every network constantly since Tuesday night, and it has really gotten me to thinking: Of this group of current Cardinals, who are the guys I would least like to tussle with? Which players should you never, ever want to be facing down in a dark alley some night after insulting their family lineage and genitalular fortitude?
Well, I'll tell you. Here are the five Cardinals you don't ever, ever want to piss off.
5. Felipe Lopez -- Starting off our countdown is the Cards' super utility man, Felipe "Floppy" Lopez. He's not the biggest guy, certainly, but I am absolutely, morally certain Felipe can rip it up with the best of them. Just look at him. Now tell me, honestly, does he look more like a second baseman or a light welterweight boxer? And not a fancy, footwork-y Sugar Ray Leonard type fighter, but a brawling, wear-you-down-over-nine-rounds-hit-me-all-you-like-I'll-hit-you-twice-as-hard Manny Pacquiao fighter. I fully expect one of these days for Lopez to take a pitch right in the mouth, step out of the box, spit out a tooth, smile a gappy smile, then step back in and motion at the pitcher to throw another.

​​(We'll call it batting average on punches in face, and his would have to be unsustainably high.) Mitchell Boggs might be a pretty tough guy, but he's got that bearded southern dandy thing going on at the moment, so I picture him fighting like John L. Sullivan, and I think I could handle that.
In the end, though, I think we can all agree it's probably a good thing Scott Rolen didn't really make Carpenter angry the other night, or the Reds would now be looking for a new third baseman and the Cards would be trying to figure out if Chris Carpenter can pitch with that Hannibal Lecter mask thing on.