Study Confirms Orangutans Lazier Than the Laziest Human You Know 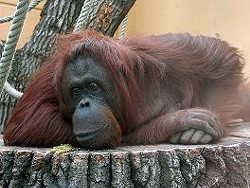 That orangutan you see at the zoo doing nothing but sitting on its rump staring at you (no matter how hard you bang on its plexi-glass cage), is indeed as lazy as you thought.

According to a new report penned by anthropology professor Herman Pontzer at Washington University in St. Louis, orangutans confined to indoor/outdoor enclosures use less energy, relative to body mass, than nearly any eutherian mammal ever measured, including sedentary humans.

Pontzer and his colleagues conclude that the low energy is "consistent with the slow growth and low rate of reproduction in orangutans, and may be an evolutionary response to severe food shortages in their native Southeast Asian rainforests."

Interesting. But what we really want to know is just how lazy (or energy efficient, you might say) are orangutans when compared to humans? Today Pontzer responded to an email from Daily RFT, writing:


To put some numbers on the human/orangutan comparison: a recent large study of normal weight adult human women living in Texas (Butte et al  2003 American Journal of Clinical Nutrition) found that on average, women weighing 125 lbs burn about 2400 kilocalories per day. By comparison, the adult female orangutans in our study, which also weigh 125 lbs, burn about 1600 kilocalories per day. So the difference is actually pretty large.

There are a lot of studies out there like the one you suggest -- measuring energy use in sedentary humans (go to PubMed, the NIH database for research articles, and search "human doubly labeled water" and you get about 550 hits). One thing that is striking if you look at those articles: the "2000 calories a day" benchmark that people often use/cite as normal for adults is bogus -- people generally use more. So the energy used by orangutans is remarkably low compared to us.