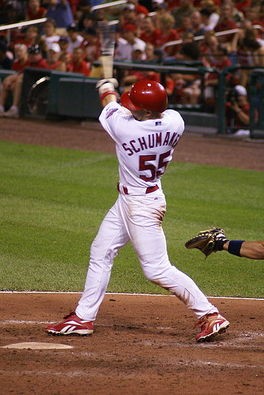 Apparently Skip Schumaker doesn't like conjecture he may, in fact, be the worst everyday player in the big leagues. Of course, the first grand slam of his career doesn't change anything beyond last night's game; if you're thinking this makes Skippy an appreciably better player, you need to pay attention for more than one game at a time.
On the other hand, if writing about Schumaker's awfulness can inspire him to such heights of production, I have to wonder if this could work with other players. I would be perfectly willing to be the most hated man in St. Louis sports if it would somehow help the team win. Hey, if I could get the Rams all the way to 6-10 this season, I wouldn't mind if I had to run the other way every time I see a player coming because of my merciless bashing.
So this is what we're going to do. We're going to have ourselves an experiment, right here and now.
I'm going to single out two players on the Cardinals, tell everyone just how awful they are, and then we're going to see how they do tonight. If I'm right, and I really do have magic powers, the Cards should be just fine.
First off, I want to tell you just how overrated Jaime Garcia is. Sure, he's having one of the all-time great rookie seasons for a pitcher, at least going by ERA, but let's face it: He's nowhere near this good a pitcher. Last time out we saw who he really is, when he was throwing absolute meat up there to get knocked around. In fact, he sucked so badly in that game he's lucky the defense loused up half a dozen plays behind him, because it made it look like the whole thing wasn't just sucky ol' Jaime getting lit up.
I don't care if Jaime has been worth 2.5 wins already this season; he's a timebomb just waiting to go off, and as long as the Cardinals have him in their rotation, they're going to be walking on eggshells, just waiting for the collapse to come.
As terrible as Jaime Garcia is, he's got absolutely nothing on our second player, Colby Rasmus. Oh, yeah, sure, he looked sooo good early in the season, walking at a tremendous pace and showing off that huge power, but what we've seen more recently is clearly the real Colby. The constant strikeouts, the disappearance of bases on balls, and a severe power outage all combine to show us a player not worth the hype he received coming up; his defensive dropoff this year has only served to highlight how wrong everyone was about his ultimate value.
In fact, I'm going to go on record right now as saying the Cardinals really should have dealt Colby already, while his value was highest. It's only going to get worse from here on, starting tonight in Cincinnati, where there is absolutely no chance whatsoever he goes three for four with a home run and five RBI. You hear me? No. Chance. At. All.
Alright, that should do it. We'll just see now if these terrible, rotten Cardinal players are as susceptible to my powers as Skippy proved to be.