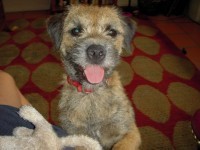 But don't ready your voting stylus just yet: Turns out the breeders who've made Missouri the nation's "Puppy Mill Capital" don't like the ballot language signed off on by Secretary of State Carnahan. They've filed suit to argue that materials describing a ban on puppy mills ... shouldn't include the phrase "puppy mills."

Proposition B would prohibit breeders from having more than 50 dogs. It would also create a misdemeanor offense of "puppy mill cruelty" if minimum standards of care aren't met.

The Missouri Federation of Animal Owners has been fighting the initiative since its inception. Their most recent argument? The Secretary of State's use of the phrase "puppy mill cruelty" -- even in quotation marks -- to describe Prop B to voters is prejudicial, according to the Associated Press. The group wants a Cole County judge to strike the measure from the ballot.

Such legal battles don't come cheap, and yet, as of its most recent filing with the Missouri Ethics Commission on July 13, the Federation's Political Action Committee had raised just $61,288, almost all of it from self-described breeders and "breeding associations" in Missouri.

That's in stark contrast to the breeders' opponents, the Missourians for the Protection of Dogs: That group -- backed by the Humane Society of Missouri, the ASPCA and other groups -- raised a staggering $776,353 as of the same period in July, according to campaign finance reports.

Even worse for the breeders, almost all of their cash has been sucked up by legal costs. Close to $39,000 has already gone to attorneys at St. Louis-based Stinson Morrison Hecker, according to a Daily RFT tally of the committee's financial reports.

Not coincidentally, the breeders' political action committee had less than $7,000 on hand at the time of its last report.

And that surely explains why the group is trying so hard to keep this proposition off the ballot: The breeders clearly lack enough money to run an effective statewide political campaign -- much less enough to take on the well-funded (and inherently popular) anti-puppy-mill crew. They've obviously realized that their best, and possibly only, chance is with a judge. If voters get a chance to decide this one, the breeders are screwed.