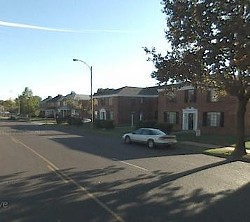 The Post-Dispatch is reporting that three people were placed in custody this morning in relation to last week's robbery of ATM Solutions -- a heist that may have yielded more than $11 million.

The suspects -- two women and a man -- were detained around 10 a.m. inside an apartment in the 4600 block of Jamieson in south St. Louis. The paper reports that a sister of one of the women arrested told a reporter that officers were questioning the man about ATM Solutions and that police found cash in the refrigerator of the apartment. Police on the scene did not talk to the press.

St. Louis police confirm to Daily RFT that a 19-year-old black male was taken into custody at 4600 "in relation to a robbery."

"Unfortunately we can't release anything further," says police spokeswoman Katie O'Sullivan.  "We likely will not be able to issue any statements on the ATM Solutions robbery unless and until someone is arrested and warrants are issued. Until then, in conjunction with the FBI, we probably won't have anything to release."