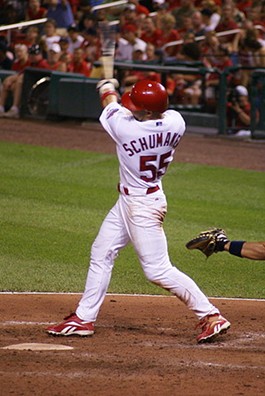 Joe Posnanski, who every year hands out a Least Valuable Player award to the player who exemplifies the principles of failing to help their team in any measurable way, shape, or form, has unofficially nominated ten players as potential LVPers.
And among the nominees? The Cardinals' very own face-first-diving-into-first wunderkind, Jared Michael 'Skip' Schumaker. The list is unofficial, and really just thrown together after a reader asked Mr. Posnanski to settle a bet as to the worst everyday player in the game, but I have to say I fully support and endorse Skippy's presence on the list.

I wrote some time ago about the horror of Skip's season; as awful as Brendan Ryan has been this year (and as glaring as his struggles have been), Schumaker has actually been worse. Why?

He doesn't defend, this year he doesn't hit, and his baserunning is, um, how do I put this nicely? His baserunning is sort of what you might expect from someone named Skip, if Skip were a terrier of some sort. With an ADD-type disorder. (Seriously, how is he not fast? I just can't get past this. He has to be fast! He looks fast! He doesn't do anything else well! He's just got to be fast!)
Oh, and looking back over that column, I can't help but notice part of what I thought would help the Cards' middle infield would be getting David Freese back healthy. Sigh. Oh, to be so naive again...
I would also like to point out I was advocating trading Skip Schumaker as far back as last May, a position which everyone I know roundly assaulted me for. (This was also back when Phil Hughes was a nice setup guy who hadn't been able to stick as a starter instead of a young dynamo in an AL East rotation.) I'm still in favour of trading him, of course, but the only difference is now I'm not sure anyone will want him.
Regardless, as happy as I am for Skip just for making this list (honour just to be nominated, and all that), there's absolutely no way he manages to pull out a win over black holes like Yuniesky Betancourt or Jason Kendall or the man Posnanski himself calls the clubhouse leader, Carlos Lee. Sadly, I think Skip will have to be happy with his mention, 'cause I don't think he's winning. Which sucks, because I hate seeing Cardinal players miss out on postseason hardware.