Break Out the Jello Shots and Sunscreen: Gov. Jay Nixon is Going on a Float Trip 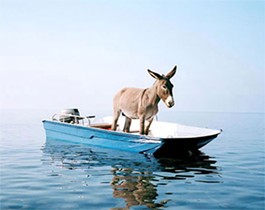 Ah, the float trip. It's a rite of passage in Missouri summer -- a way to blow off steam in our steamy August temps.

Today, in attempt to prove he is an everyman in touch with the environment in his home state, Gov. Jay Nixon is packing up the inner-tubes and canoes and heading out with his wife and a few state officials for a float down the Current River.

Will the Gov hit the rope swing after he gets blackout wasted on Jello shots?

Nixon is using the trip to raise awareness about litter and pollution in Missouri waterways, so don't expect any little plastic cups or empty beer cans to be flung from his boat.

According to the Missourian, Nixon plans to "meet with members of a local 'stream team,' which helps pick up trash and stabilize stream banks." He'll also be joined by state conservation and parks leaders.

The governor and his wife Georgeanne opted for a seven-mile float on the Current, starting in the southern part of the state near the border of Dent and Shannon counties.