Notes From the Red Carpet: Will Ferrell and Mark Wahlberg at The Other Guys Premiere

Ferrell and Wahlberg were late to arrive to the Chesterfield Galaxy 14 Cinema last night. The crowd was massive and psyched. Security had to construct barricades to make room for all the extra people.

Apart from Ferrell and Wahlberg, the cavalcade of celebrities was thin. There was an unexpected appearance from Don King, who came out to enjoy the spotlight and talk up the Devon Alexander fight. He also shared the stage with Ozzie Smith for a moment.

Ferrell and Wahlberg finally arrived, but took their time making it to the stage. In a show of class, Ferrell walked all the way to the fans who were furthest away to shake hands and sign some autographs. He and Wahlberg spent a good 30 minutes working the crowd before taking the stage.

The crowd was going nuts. People were chanting "Meatloaf" from Ferrell's role in Wedding Crashers. One fan was banging a cowbell, and one college-aged guy climbed a tree to snap a picture with his phone. For a moment, it looked like he was going to take a wicked tumble, but he pulled off the shot.

St. Louis Mayor Francis Slay welcomed Ferrell and Wahlberg to the stage. He presented each with a key to the city. Ferrell added that he couldn't wait to find a matching gold necklace so he could wear it on his chest.

Ozzie Smith joined the duo on stage and presented them with Cardinals' jerseys. He cracked jokes about Wahlberg being a Boston Red Sox fan, but Wahlberg shot back, "But I love Ozzie."

Ferrell showed his Redbird colors when he jokingly added, "I was hoping Jack Clark would show up." 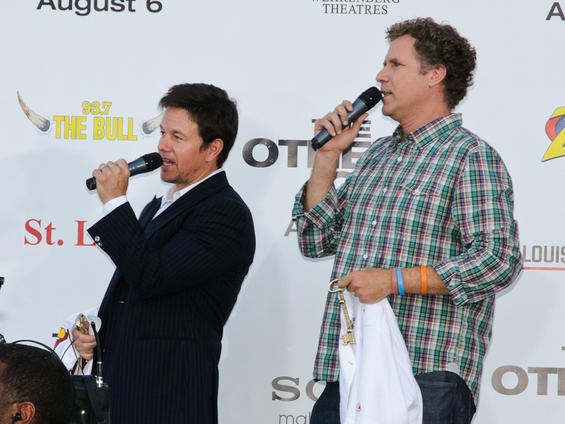 Moderated by Y98, they took questions from the crowd.

Someone asked Ferrell which of his movie quotes he hears from people the most. Ferrell rattled off a list of fan favorites for the crowd.

"More cowbell," he said (although technically not a movie, as he pointed out). Then, "You're my boy blue" from Old School, and then a personal favorite from Anchorman: "I wanna be on you."

Next, someone asked Walhberg why he never looks back at an explosion in his films. He responded, "Because I'm a bad ass."

At one point, Wahlberg interrupted Ferrell's response to a questino, yelling out to four young men standing on the roof of an SUV: "Hey guys, I hope that's your car."

The crowd erupted into laughter and with keen timing (and eye), Ferrell quickly added, "And to the guy with the baby, I hope that's your baby." A man holding his baby on top of a car behind the young men waved back enthusiastically.

There was also a Rams player dressed like Buddy the Elf -- a massive Buddy the Elf, followed by his own NFL-sized entourage. Ferrell noticed him and invited him on stage.

The jokes began. Wahlberg pointed out that it was the biggest elf he had ever seen and tried to talk Ferrell into taking a tackle from the pro-football playing elf. Ferrell would have none of it.

They thanked everyone for the warm reception. Ferrell told the crowd that the turnout was amazing and he had never seen anything like this. He explained that as voting was winding down to the top 5 cities, St. Louis was in ninth place. Out of nowhere, he said, you guys started voting like crazy and wound up coming in first.

The crowd gave them goodbye applause, and they spent another 30 or so minutes talking to the press and chatting with fans, signing autographs.