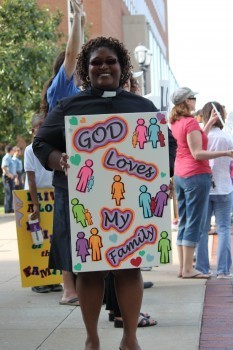 Same-sex marriage supporters outnumbered the antis by four-to-one -- even more, by some counts -- at last night's National Organization for Marriage rally and Show Me No Hate counter-action in Clayton. The rallies came on the heels of the repeal of Prop 8, 's anti-gay-marriage amendment.

Overall, the two groups' demonstrations were pretty civil. NOM had a permit from police to occupy Memorial Park, the green space on the campus of the police department. Plenty of county officers were on hand to keep the rainbow-flag waving counter-demonstrators corralled on the sidewalk, where their signs elicited plenty of supportive honks from passing cars.

"Using religion to exclude people is immoral," said the Rev. Rebecca Turner, executive director of Faith Aloud, a religious group that supports reproductive health and rights. "I believe that God made everyone and loves everyone and accepts everyone.

"This is a positive event," said Scott Emmanuel, co-founder of the event and husband of Ed Reggi, founder of Show Me No Hate. "We know that public opinion is shifting."

The NOMmers were safely far back from prying eyes, carrying signs about states' rights and kids deserving both a mother and father. Their half-dozen or so speakers characterized judge Vaughn Walker's overturning Prop 8 as trampling states' rights.

A few called it a culture war, and there were some great groaners:

John Splinter, executive director of the office of the National Coalition for the Protection of Children and Families, asked how many in the crowd of about 60 were married. Most hands went up, and he went on to talk about how married people would die for their wives. But plenty of those hands belonged to women -- women presumably straight-married to dudes. Guess they wouldn't die for their husbands?

But Show Me No Hate folks and NOM folks were both adamant that they wouldn't be confrontational with one another, and they weren't.

Follow That Story Gettin' All Religious Up in Here LGBT News