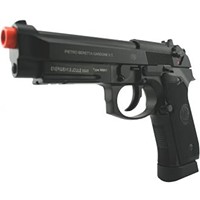 Brian Heath Duff reportedly told FBI agents last week that he robbed a bank in southwestern Illinois because he owed drug dealers thousands of dollars as a result of his heroin and Oxycontin addictions.

Duff, 36, of Livingston, Illinois, allegedly robbed the First National Bank of Staunton in Hamel back on July 26 using an Airsoft gun he purchased on eBay and a fake bomb (composed of two 9-volt batteries and a stereo amplifier) to convince clerks to hand over cash.

Duff made off with a little more than $1,400 before being arrested minutes later in the pickup truck he borrowed for the heist.

"I know why you're here," a defeated Duff reportedly told the arresting officers.