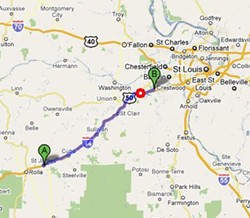 According to reports, two buses full of young teens from the St. James School District were headed to Six Flags this morning when they became entangled in a pile-up involving a pickup truck and a tractor trailer.

A female teen traveling in one of the buses and the driver of the pickup truck have reportedly died of their injuries. Fifty other people -- mostly students -- were injured in the accident that has closed down the highway near Gray Summit  -- 30 miles southwest of St. Louis.

More details as they become available.