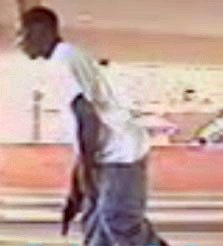 Updated Friday 11:30 a.m. St. Louis police tell Daily RFT that the suspect described here is not wanted in connection to the robbery of ATM Solutions. Police just now released the following photos because until this week they were following strong leads that didn't pan out.

The incident occurred around 7 a.m. July 10 when a 60-year-old woman was driving through the ATM at Southern Commercial Bank at 5515 South Grand. According to police, the suspect approached the vehicle with a gun and tapped on the window, ordering the woman to open the door. Instead the woman sped off, at which point the suspect fired a shot that shattered one of the car's windows and resulted in minor injuries to the driver.

It's unclear why the police are seeking help now with case -- three weeks after it occurred.

A Daily RFT inquiry to police asking if the suspect may also be wanted for Monday's early morning heist of ATM Solutions -- a robbery that netted thieves as much as $11 million -- was not immediately answered.

Anyone with information regarding the suspect's (identity pictured) here is urged to contact CrimeStoppers at 1-866-371-TIPS. Callers can remain anonymous. Callers who provide information that leads to an arrest may be eligible for a cash reward of up to $1,000.