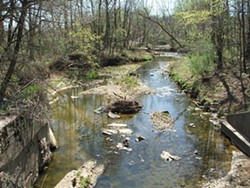 The Missouri Coalition for the Environment filed suit against the Environmental Protection Agency yesterday in federal court in Jefferson City alleging that the federal agency has not done its job in enforcing the 1972 Clean Water Act for more than 150,000 miles of streams and creeks in Missouri.

At issue are small tributaries and brooks that the state considers to be "unclassified" waterways, such as Kiefer Creek in Ballwin's Castlewood State Park, and therefore are exempt from the water safety act.

Kat Logan Smith, executive director of the coalition, tells Daily RFT that the lawsuit is a long-time coming with her agency filing a similar suit against the EPA in 2004.

"These non-classified streams account for 80 percent of the waterways in Missouri," says Smith. "They're the streams and creeks that flow through our parks and neighborhoods and the ones that we're most likely to come in contact with."

The problem, says Smith, is that Missouri allows businesses and developments located near these unclassified waterways to discharge waste and sewage into the streams without following protocols of the Clean Water Act. Meanwhile, businesses and developments located downstream -- along "classified" waterways such as the Missouri, Mississippi and Meramec rivers -- must comply with federal water safety standards.

"It's not fair for the person following the law when others in Missouri don't have to adhere to the same protocols," says Smith. "That's especially true when the water from unclassified streams eventually makes it into our bigger rivers."

The EPA is named as the defendant in the suit because it's supposed to enforce the Clean Water Act, says Logan.

The Missouri Department of Natural Resources has been forced to close several popular swimming holes and beaches this summer due to dangerously high levels of E. coli virus found in the water.

The problem with sewage and E. coli in Missouri waterways was the subject of a recent RFT feature story, Deep Doo-Doo.