Cardinal Trade Targets From the Department of Dumb Ideas

Okay, so I know things aren't great around here in Cardinal country just right now. The team is scuffling, the injuries are piling up, and we're all still a little peeved over Ryan Ludwick being traded. And I also know, given the time of year, that trade talk is still going to be rampant no matter what.

Sure, the non-waiver deadline is passed, but that just means one extra step for any potential deal, not a huge line of hurdles. It's only natural people looking at how the Cards might improve the squad to try and make a shambling, shuffling stretch run will throw out names of players they think will present upgrades.
However, that does not excuse the abject stupidity of some of the names being discussed.

I was driving in my automobile one day late last week, and I had the radio tuned to sports talk, since it is sort of my job. And on the radio was Andy Van Slyke, former Cardinal outfielder turned dumbass media guy turned Detroit Tiger coach, and he was discussing the Cardinals. I don't recall who the host of the show was; I was only about half listening anyway. But when the subject of trade targets came up, Van Slyke said something which really got my attention. He said he thought the best guy the Cards could go after would be Adam Dunn, someone to really upgrade the offense.
Now, I immediately began trying to figure out whether or not Van Slyke was serious, but he kept talking, expounding slightly on his Dunn idea, so I assumed he was. "Oh, well," I thought to myself, "It's just Andy Van Slyke. Guy has no idea what he's talking about anyway. Surely anyone with half a brain could see what a bad fit that would be."
Then, just yesterday, I was listening, once again, to the radio, tuned to whatever nonsense it is 101.1 has on in the afternoon, and D'Marco Farr, scion of jocks who don't understand sports half as well as they played them everywhere, said the exact same thing Van Slyke had said. He wanted Adam Dunn to upgrade the offense. But then it got worse.
When questioned about where Dunn would play, Farr's response was (and I'm paraphrasing here), "Well, in that situation I just say to Tony: you figure out how to get him in there. I got the guy, you figure out where to play him."
Thankfully, I was able to maintain control of the car, but only at the cost of a mild stroke, I will admit. (So if my typing looks funny, it's because my left hand no longer works. Thanks, D'Marco!) Just figure out how to get him in there?! 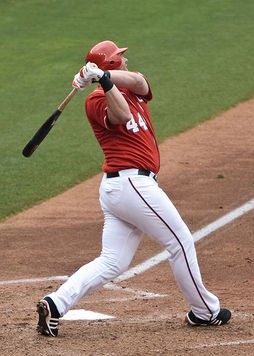