Rookies Shine at Rams Training Camp, Have Yet to Become Tainted

August 03, 2010 at 9:19 AM
comment
A few hundred fans made the trek out to the Rams training grounds yesterday in the 96-degree heat to check in on our bruisin' losers. Daily RFT was on hand to catch a glimpse of Sam "The Great White Hope" Bradford and get a few pictures of him while he's still a rather handsome young man -- and not buried under several hundred pounds of opposing defensive linemen. 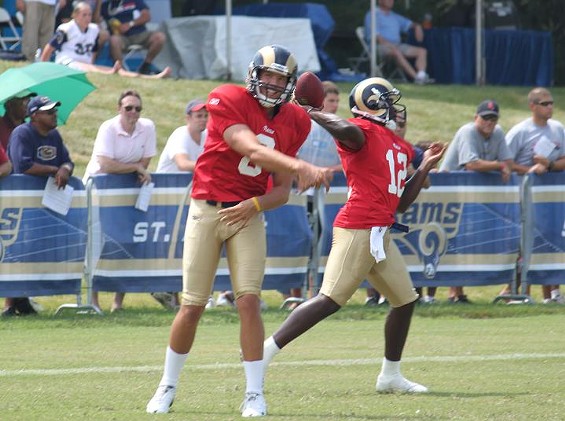 And while younger fans at yesterday's practice were giddy over the highest-paid rookie in the history of the NFL, their parents were more concerned over Bradford's receivers. Steven Jackson and the team's other veteran stars (there are others, right?) were oohed and ahhed, then succinctly passed over so fans could gawk at the wide-eyed wide outs fighting for a spot in the starting line-up.

As the stable of receivers caught passes close to the fence, fans supplemented the coaches' feedback with their own, giving the receivers and the cornerbacks covering them eager direction -- cheering for one, disparaging another, calling illegal-use-of-the-hands on a third. More experienced players such as Laurent Robinson had to grind it out against newcomers such as Mardy Gilyard, and we might not know who will start until they take the field for the opener against the Vikings.

One player drawing a lot of fan support was rookie and third-round pick Jerome Murphy of South Florida, whose work at cornerback might earn him some time in the coming months. All these rookies looking to earn playing time means one thing: time to get a jump on coming up with nicknames. Murphy's Law? Murphy Atoll? We'll work on it.