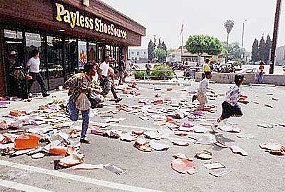 I think we can all safely say this: last night totally wasn't Jake Westbrook's fault.
That's actually kind of a good thing to be able to say, too, seeing as how the vast majority of the Cardinal fanbase right now seems ready to string Westbrook up for being The Dude They Traded Ryan Ludwick For. Thank god he didn't come out and get lit up; we're not usually a rioting sort of town, but I do believe the denizens of this fair city just might have gone all Detroit basketball fan is Westbrook had.
Unfortunately, the Cardinals took last night's game against the Astros as yet another prime chance to showcase their schizophrenic and, let's face it, vaguely Murphy's Law-esque character once again, ruining what could have been a very nice welcome to town for the newest member of the Redbirds.
-- Something I did find a little amusing over the weekend: when John Mozeliak was introduced at Whitey Herzog's number retirement ceremony, he received more than just a smattering of boos. I found this odd, and asked the gentleman sitting next to me, an old Cardinal lifer by the look of him, why he was booing. He turned to me and said something I'm sure he thought was very intelligent:
"Because he just traded away one of our best players in the middle of a pennant race and got jack shit in return. And now he's up there with the greatest manager and GM this team has ever seen. Whitey would never have made that move, never made the team worse. That's why."
To which, of course, I responded that sure, Whitey Herzog made the team worse, like when he moved Ted Simmons and ended up with Darrell Porter at catcher. Traded away a guy who should be in the Hall of Fame and brought in Darrell Porter. That's a painfully large dropoff.
Well, apparently I just don't understand baseball, since the Cards won the Series in 1982, which of course was apparently directly related to Porter's presence. I argued that no, you could certainly argue having Bruce Sutter made a huge difference in the positive, but moving Ted Simmons made the team worse, and the Cardinals won in '82 in spite of Herzog's moves, not because of them. The old man did not speak to me again. I'm okay with it.
-- Anyway, back to the game last night. I'm going to defend Tony La Russa here, much as I am loathe to do so. I was happy he brought Jason Motte out for a second inning. I thought Motte threw very, very well his first inning and felt good about seeing him still on the mound to try and get three more outs. I wrote not too long ago about how frustrating it was to see La Russa take a reliever out of the game for a much, much worse pitcher; I have to give him credit for riding his best horse. Of course, Motte screwed it up by losing his release point and walking two hitters, putting bullpen management at least temporarily in catch-22 territory: Tony makes a move and the guy shits the bed, he doesn't make a move and the guy still shits the bed. Either way we're washing sheets.
-- Of course, along with that good decision also came a bad one. In leaving Motte in the ballgame, La Russa also pulled one of his patented Insane Tony Double Switches, taking Colby Rasmus out of the game in favour of Randy Winn, who really shouldn't be on a major league team at all. The idea was to avoid having the pitcher hit in the bottom of the seventh, which it accomplished, but it also made the team substantively worse by hurting both the offense and defense. So, you know, not so good.
-- Okay, I've tried to be optimistic about Mike MacDougal's presence on this roster. I really have. I kept saying to myself, hey, he's got a live arm, maybe there's still something in the tank, and at least he isn't going to be used in high-leverage situations and on and on and on. I even said nice things about him after his Cardinal debut; I thought his fastball had a nice combination of velocity and sink that might make him a contributor.
I think I'm done being optimistic about MacDougal. He needs to be off this team, and Fernando Salas needs to be back up with the big club. Salas is clearly the better pitcher now, and the gap is only going to get wider as he settles in to being a major league pitcher. Sorry, Mac, but the kid's just better. Get it done, Mo.
-- And finally, what did I actually think of how Westbrook himself pitched? I thought he looked very good, pretty much as advertised. Heavy sinker, lots of grounders, funky delivery, couple of solid offspeed pitches thrown in there. It's tough to really find anything not to like about the way Jake Westbrook pitched last night. Even the inning when he gave up a pair of runs he wasn't getting hit particularly hard; the leadoff double was hit fairly hard, but it was still on the ground and just placed down the line. Add in an infield single and you've got one of those innings that just sort of happens.
So all in all, I think we have to be as happy as we can be with how the newest Cardinal acquitted himself last night. Welcome to town, Jake. Nice game. Now if you could just hit about 25 homers and grow a giant head that looks vaguely like that of Tom Hanks, St. Louis might - might - forgive you.