Several local news outlets have already donned their deerstalker hats and done their best Sherlock Holmes impressions by connecting the robbery of ATM Solutions Inc. in Midtown yesterday with two other similar burglaries of armored cars in 1999 and 1992.

In the heist yesterday, four mask-wearing, machine gun-toting crooks surprised two workers at the ATM servicing company's offices near Saint Louis University, tying them up with duct tape and driving off in an armored van with a haul estimated at $4 million. Investigators are keeping a tight lid on the details but it appears that they have no leads in the case.

The robberies in the '90s were similar but far from identical. The one in 1992 happened in an under-construction bank in downtown. Two masked men in white overalls tied up a Brinks guard and made off with $847,000. The other caper occurred in Hazelwood in September 1999. Three gunman ambushed a female armored car driver and got away with more than a cool million in cash.

All this sound familiar to anyone else?

Yeah, we've seen the movies too. If the FBI is looking for suspects in yesterday's robbery the first people they ought to call are Robert De Niro, George Clooney (he's familar with St. Louis anyway, right?), Harvey Keitel and Keanu Reeves.

1. Point Break
The Plot: Patrick Swayze (RIP) plays a crazy surfer who leads a pack of other crazy surfers that rob banks while wearing dead president Halloween masks. Keanu Reeves is Johnny Utah, the FBI agent who has to go undercover and arrest them.

What it has in common with yesterday's robbery: Thieves pull the same type of heist over and over with military precision and are almost untraceable afterward.

What's different: Well, we're in the Midwest so the nearest surf spot is a solid 2,000 miles away.

2. Heat
The Plot: Robert De Niro is an expert thief looking for one last big score. Al Pacino is the detective trying to track him down. Val Kilmer has a ridiculous ponytail.

What it has in common with yesterday's robbery: De Niro and his heavily armed sidekicks strike an armored car and make off with a mint.

What's different: The armored car guards lived to tell the tale. Also, no bloody rampage with assault in the streets of St. Louis or near the airport. Then again, that was way after the armored car robbery so time will tell on this one. 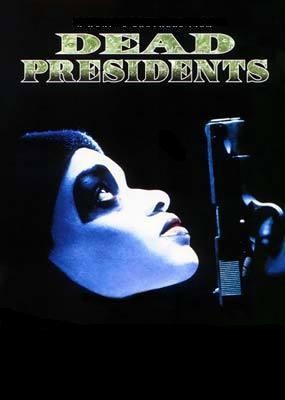 3. Dead Presidents
The Plot: Vietnam vets struggle with post-war life in the Bronx in the early '70s, plan a robbery to make ends meet.

What it has in common with yesterday's robbery: Another armored car.

What's different: The armored car wasn't blown to pieces and a policeman did not stumble onto the scene of the crime and get shot in the head. Also, this isn't the Bronx in 1973 and the robbers weren't wearing elaborate face paint.

4. Reservoir Dogs
The Plot: Well-dressed professional thieves target a diamond store but the robbery goes wrong when it turns out one of them is an undercover cop.

What it has in common with yesterday's robbery: A body was recently found mutilated in an abandoned warehouse in East St. Louis, a setting very similar to Tarantino's infamously gruesome "Stuck in the Middle" torture scene in the movie.

What's different: Again, no melee in the streets. It's doubtful the robbers had sweet names like Mr. Blonde and Mr. Pink.

5. The Great Muppet Caper
The Plot: Kermit the Frog, Fozzie Bear and Gonzo the Great are newspaper reporters investigating a jewel heist from a fashion designer in London.

What it has in common with yesterday's robbery: Nonsensical newsmen bumbling as they try to solve a crime they really know nothing about.