Michele Bachmann Calls It In: Campaigned for Roy Blunt Via Skype 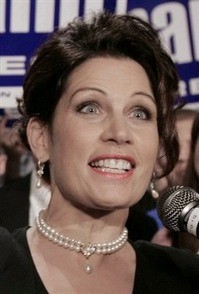 When people say that elected officials phone it in, they really aren't kidding. Minnesota Congresswoman Michele Bachmann campaigned for fellow Republican Roy Blunt's Senate campaign here via Skype over the weekend, the St. Louis Beacon reports.
Bachmann was hospitalized over the weekend for an undisclosed illness, so the fundraiser she was set to headline for Blunt this weekend was postponed. The congresswoman still managed to address several dozen phonebank volunteers making calls for Blunt ahead of this Tuesday's Republican primary, booming down from a large video screen, wearing pink and promising that Blunt, if elected, would undo some of the changes President Barack Obama and the Democratic Congress have made in the last year and a half.
Ah, the wonders of technology. How else would crazies beam their maniacally grinning images all over the country?
Though she still showed her face in support of Blunt, Bachmann's online-only appearance may have actually been a way for the congresswoman to save face. See, Bachmann is the poster girl for the ultra-conservative Tea Party movement. And Blunt is...not.
Twenty-eight area Tea Party groups last week planned to protest Bachmann's appearance in support of Blunt, sending an open letter accusing Blunt of being part of the "big-government problem."
Which raises the question: Caught between a Blunt and a Tea Party place, what, exactly was Bachmann's "not serious, but sudden" illness that kept her from St. Louis this weekend? Political cowardice-itis?