St. Louis U.S. Attorney: This Is Not Chicago, "You Just Can't Vote Twice!" 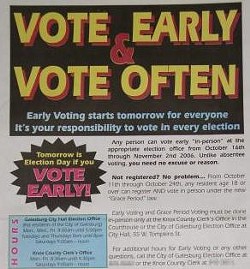 According to court documents, Campbell had been a long-time registered voter in the city of St. Louis when he moved to Edwardsville, Illinois in June of 2007, and then registered to vote in Illinois. As the 2008 general election approached, Campbell voted in October in Illinois, under that state's early voting procedures, and later voted in the City of St. Louis on election day November 4, 2008.

United States Attorney Richard Callahan noted that Campbell voted both times under his actual name and that neither of the registrations involved fraud at the time of registration. The problem Callahan said is, "you just can't vote twice!"

So who did Campbell vote for -- Obama or McCain?

The U.S. Attorney's office tells Daily RFT that prosecutors don't know. Campbell's attorney, public defender Michael Dwyer, tells us he never talks to the press about any of his clients, so bugger off.

Campbell faces a maximum penalty of five years in prison and/or fines up to $10,000, when he is sentenced on October 22.