New and Old Worlds Collide: Was Man Texting and Driving When He Struck Amish Buggy? 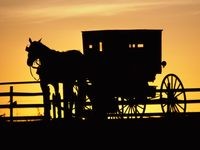 That's the speculation in mid-Missouri where a man was charged yesterday with second-degree involuntary manslaughter slamming into an Amish buggy in January.

According to reports, 43-year-old Jeffrey Fleming of Staunton, Illinois, was traveling down Highway 63 in rural Randolph County this past January when his vehicle slammed into the buggy driven by Eli Borntrager. The 29-year-old Amish man from Madison, Missouri, died for internal injuries at the scene.

Phone records indicate that Fleming texted his wife at 10:49 a.m., or two minutes before police got a call for service for the accident. Fleming insists he was not texting when his car slammed into Borntrager's buggy while going 70 miles per hour.

So, who's to blame in all this? Sounds like the subject of a Tuesday Tussle.