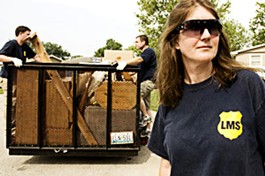 Stop paying your rent or mortgage in St. Louis County, and eventually a sheriff's deputy and a moving company will come knock on your door.

Sometimes you know when they'll arrive, sometimes you don't. On the day of reckoning, the sheriff's deputy will ask you to leave and, if necessary, call the police and force you out of the house. Then with the sheriff standing by, the moving company will pack up everything you own and pile it on the nearest public sidewalk.

At least, that's how things used to work. Effective August 9, the County is changing its evictions process.
Under the new system, past-due tenants will be told five days in advance that they have to pack up and vacate the premises. After the grace period passes, a sheriff's deputy will arrive tell the inhabitants it's time to go, then stand by as the landlord changes the locks. All possessions left inside the rental property or foreclosed house will then be considered "abandoned," and the landlords will be free to do with them as they please.

The moving companies, which have butted heads with the sheriff's office in the past, worry that the new system will put them out of business and put landlords and their property in harm's way.

"It's going to be a mess," says Laura Smith, owner of Kirkwood-based Landlords Moving Service. "If I show up and I know you changed my locks and all my stuff is inside, I'm going to wait until middle of night and break in and get my stuff. They'll be damaging landlords' property."

What's more, Smith says, if a significant amount of property is abandoned, moving companies like hers will be forced to haul the left behind items -- without a law enforcement officer standing by offering protection from disgruntled former tenants.

"We've had people throw rocks and break the windows of our truck," Smith says. "We've even been shot at. There's the potential for violence and for things to go awry. If you don't have the sheriff at the job site, someone can be injured."

Paul Fox, director of judicial administration in St. Louis County, says the changes are necessary in order to make the eviction procedure more efficient. Currently, he explains, sheriffs are only able conduct evictions in one region of the county each day because it takes time to move people's possessions to the curb.

"This speeds up the process," Fox says. "It makes it easier. Hopefully most people will move out on their own. It will save them trouble and us too. We've got municipalities that have passed ordinances against moving property onto the sidewalk and the landlords are usually the ones that bear the brunt of that."

Smith is skeptical. In 2004, she blew the whistle on a bribery scheme perpetrated by four St. Louis County sheriff's deputies. The deputies were demanding kickbacks from the movers to schedule evictions. For nine months during 2005 and 2006, Smith wore a wire and recorded her phone calls with the deputies. Four deputies were eventually indicted. Two pleaded guilty and were sentenced to probation; two others went to trial and were sentenced to 33 months in prison.

In 2008 Smith filed a lawsuit alleging that the Sheriff's Office was trying to sabotage her company's business as payback for exposing the corruption. Today, she alleges that the new system is being put in place to minimize the role of moving companies in the evictions process.

"It's not even an eviction anymore," Smith complains. "They're saying they don't have to get rid of this property, let's just change the locks."

Not so, says Fox.

"We want to give [tenants] advance notice," he says. "We don't want to kick people when they're down and not give them a chance to get their belongings out of there. We also got complaints from residents about their stuff sitting on sidewalk, that anybody that walks by can grab it."

Landlords Moving Service, which handles between 90 and 150 evictions per month, claims that in the metropolitan St. Louis area, the new eviction procedure will be the only one of its kind. Fox says he's unsure if the system is in place in any other counties or the City. A call to the St. Louis Sheriff's Department inquiring about the city's eviction process was not returned. Here's the info on their website.

Fox notes that the change was made possible by a state law passed in 2006 that ensures landlords are not liable for possessions left behind after an eviction.

Fox, Sheriff Jim Buckles and several deputies have a meeting scheduled tomorrow afternoon to discuss the new procedure with some landlords in St. Louis County who will be affected by the changes.

Alan Weber, an attorney for several landlords, says he's withholding judgment until then.

"Until there's the meeting to answer questions and stuff and get a better handle on this, it will be hard for anyone to give an opinion," Weber says. "What I do know is that [the sheriff's] office has been a problem in this area for awhile. I don't know if this is something to rectify that or not."