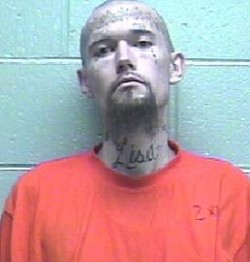 Authorities in southern Missouri have arrested 30-year-old Jesse Driskill with the rape and murder of a 76-year-old woman and the killing of her 82-year-old husband in Laclede County.

According to reports, Driskill shot to death Johnnie and Colleen Wilson at their home Monday night in Lebanon. He's accused of wrapping the couple in blankets and then trying to set them on fire, though the accelerants failed to ignite.

Driskill -- a career criminal with multiple convictions -- then allegedly stole the couple's Chevy Trailblazer and set the vehicle on fire. A driver later picked up Driskill near the burned out vehicle. (Who in their right mind would pick up a man who looks like Driskill?)

Driskill then reportedly confessed to the driver that he had been caught burglarizing a home and killed the homeowners. The driver called authorities who arrested Driskill a short time later.

Apparently, Driskill wanted to return to prison. He'd just been released June 9 after serving a sentence for assault.

His friends say Driskill's turn toward crime and violence can be traced back to childhood. In 2007 he allegedly stabbed Lisa Rogers -- the mother of his child and the woman whose name he has tattooed on his neck -- with a pair of box cutters. In 2008 he's also accused of beating Rogers and her cousin with a wooden chair.

"I tried to counsel with him and talk with him about the Lord and try to teach him the right things," Bill Rogers tells KSPR Springfield. "He's been locked up so long that's all he knows. When you take someone like that that's been institutionalized for so long they can't handle society out here."

Driskill's long history of crime spans two decades. He pleaded guilty to at least one crime almost every year since 1999. His juvenile record is not open to the public. The Rogers' say Driskill had an abusive childhood.

"He'd be left alone for days with only ketchup sandwiches," Rogers said. "He told us he was also thrown off a bridge."