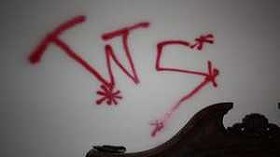 Not content with merely stealing electronics and jewelry, the burglars who broke into a Collinsville home last Wednesday, July 21, decided to mark their territory. They used red spray paint, which is not the easiest to remove, but definitely smells better than pissing in a circle.

The burglars used red paint to write the letters "WS" and asterisk marks all over the house's interior walls, countertops and furniture.

The Madison County Sheriff's Department told the Belleville News-Democrat that there was no evidence of racial slurs. Police could also find no evidence of a motive, though the homeowners said that the previous Saturday, they had seen people riding ATVs across the yard and throwing things at the house.