Saturday night's storm was quite a doozy, I think we can all agree. No one would probably agree more than the eight residents of 4311 Gibson Avenue in the Forest Park Southeast Neighborhood, also known as the Grove.

The three-story house next door, 4309 Gibson, had been unoccupied for some time. Shortly before 10 p.m. on Saturday, the top story of 4309 collapsed, sliding onto the second (and top) floor of 4311. The collapse also destroyed about one-third of the front of 4311.

None of 4311's residents were physically harmed, though they are now homeless. Firefighters spent about half an hour trying to remove loose bricks before giving up and stapling a "condemned" sign on the building.

4309 Gibson was owned by Grove Place II LP, a concern which owns several other properties in the neighborhood that are managed by FrontDoor, a leasing company that mostly caters to students. Neighbors told the Post-Dispatch that 4311 had been in disrepair and leaning for quite some time and they had tried to get the city to tear it down.

Here's a photo of the collapsed building from UrbanSTL: 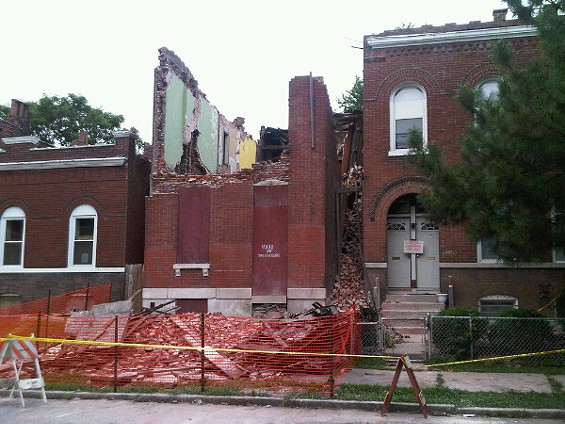