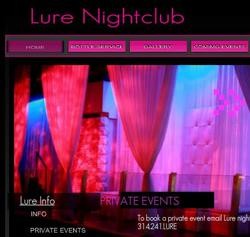 These are the nuisance complaints (attached below) filed against Lure nightclub with the city's Citizen Service Bureau over the past 15 months and part of the body of evidence now being used in a push to discipline Lure and two other downtown bars.

Most all of the complaints come from the the people Lure co-owner Nick Trupiano calls his "neighbors" -- the people living in the lofts directly above his Washington Avenue business.

Trupiano believes that city officials and the police are now coaching his neighbors at 1204 Washington Avenue (known as the Jack Thompson Square Lofts) with how to go about assembling evidence that could lead to the city stripping Lure of its liquor license.

Mayor Francis Slay's office tells Daily RFT that a letter is being mailed out to Lure, Sugar (1405 Washington Avenue) and F15teen (1900 Locust) asking them to attend a public hearing in part to address nuisance complaints (below) surrounding the clubs. Numerous complaints have also been made to the cops in the past year, according to the St. Louis police department.

For his part, Trupiano says he's already addressed several of the nuisance complaints phoned in against him. His club is no longer taking up parking spots on Washington Avenue. Valet service for Lure is now run off the adjacent Tucker Boulevard. He's also working to address complaints about smoke -- though that may take a while.

"We're on the first floor of the building," says Trupiano. "Above us are three floors of offices and then residential housing on the fifth and sixth floor. That's a long way for smoke to travel, but we are addressing it. The thing is, we're a 7,000-square-foot club and we need two smoke-eaters that would probably cost $25,000 a piece."

As far as Trupiano is concerned, the real issue the city has with Lure is the club's "Red Hot Thursdays" -- a night that caters largely to an African-American clientele.

"We've had officials and police officers tell us they don't want us having our Thursday night event," says Trupiano. "They couch it by saying it's an issue of crowd-control, but I think race is definitely a factor."

The club's Red Hot Thursdays averages 500 to 600 patrons a night and accounts for about 60 to 70 percent of Lure's weekly revenue. On Tuesday of this week, Trupiano -- who is white -- placed signs on the window of Lure saying: "Jim Crow is Alive and Well in Downtown St. Louis" and "Downtown Doesn't Like Black People."

"I'm not a civil-rights leader or an activist," confesses Trupiano. "The closest I've ever been to racism was watching Mississippi Burning on TV. That said, I feel I'm experiencing it now."

Trupiano says his club is being unfairly blamed for violence downtown -- such a shooting near Lure in the predawn hours Monday. "We weren't even open for business Sunday night," says Trupiano. Last month, police were shot at from people arguing in a parking lot near Lure. "The only connection that you could draw to us is that the suspects were black and it happened on a Thursday night," maintains Trupiano.

He adds that no matter what happens to his liquor license, the city is going to have to deal with the issue of clubs catering to predominately African-American crowds. "The three clubs being targeted here have that one thing in common. We all host hip-hop nights. And other clubs are catching on, too, and are starting to do the same thing. There's a huge demand for these events. They're not going away."

Updated at 11:13 a.m. Since this has been mentioned in the comments section below, I should probably bring it up here. Yesterday someone posted a link on Daily RFT to a  Myspace page allegedly belonging to Nick Trupiano. The Myspace page lists one of Trupiano's heroes as James Earl Ray, the infamous assassin who murdered Martin Luther King Jr.

Given Trupiano's recent claims of racism, it would seem rather disingenuous for him to name Ray as one of his heroes. Yesterday I asked Trupiano about the Myspace page and the Ray reference. Trupiano says the page is a joke made at his expense by a friend. "It also says I have kids and all kinds of things," he said. "I had nothing to do with it." Today it appears that the Myspace page has been shut down.