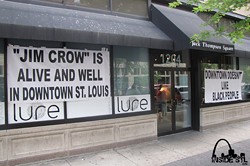 Corrected and updated (with specific number of police calls to the clubs) at 9:24 a.m.

So, here's a curious aside regarding the city's crackdown this week on three downtown nightclubs.

On Monday, Daily RFT specifically asked the St. Louis Police Department whether Monday's shootings downtown had anything to do with the nightclubs on Washington Avenue. A police spokesman told us they couldn't draw a connection between Monday's violence and the clubs.

Then, as insidestl.com reported yesterday, the city now plans to discipline two clubs on Washington Avenue (Lure and Sugar) and another on Locust (F15teen) in part because of Monday's shootings. Perhaps the city is drawing its own conclusions regarding violence and the clubs?

Whatever the case, it appears the city does have plenty of ammo, both figurative and literal, at its disposal. Just last month police picked up spent shell casings near Lure after the cops were fired upon when they responded to a fight following the conclusion of the club's Thursday night "hip hop" event.

Also last month the Downtown St. Louis Residents Association, held a meeting with downtown's three aldermen and St. Louis excise commissioner Bob Kraiberg to discuss complaints they had with noise and violence stemming from Lure. The group is currently working on a petition drive to get Lure's liquor license reviewed.

St. Louis police inform Daily RFT this morning that police have been called to the three clubs on 76 occasions in the past year. That includes 36 calls to F15teen, 30 to Lure and 6 to Sugar -- for incidents involving everything from fights to lost cell phones. Of those 76 calls, 30 ended with police reports. Below is a list of some of the grievances:

F15teen: Two people in a fight (two of the reports were this same incident), three car break-ins, fight, a fight that started at a different club nearby and the victim wandered over to F15teen to call police, auto theft, man causing a disturbance, two girls fighting, a woman who said her boyfriend had assaulted her, fight between several people, someone who was intoxicated hit a police officer, car break-in, someone causing a disturbance, someone trying to use fake money, failing to abate a nuisance.

Sugar: Lost cell phone, someone who was injured after falling down stairs

Lure: Stolen purse, property stolen after being left on a table, two incidents for someone causing a disturbance, someone trying to use fake money, a stolen car was recovered, stolen cell phone, auto theft, fight outside the club, car accident outside the club, failing to abate a nuisance.

Yesterday, Nick Trupiano, a co-owner of Lure, played the race card. Plastering the windows of his nightclub with signs saying: "Jim Crow is Alive and Well in Downtown St. Louis" and "Downtown Doesn't Like Black People." Trupiano, who is white, says his club earns 60 to 70 percent of its business from its "hip-hop" nights.

Last month, Kraiberg told Daily RFT, that the city doesn't have any problem with the skin color of club-goers. "Most the people who attend these hip-hop shows behave themselves, it's the five percent who don't that ruins it for everyone," said Kraiberg.

Correction: This story initially cited numbers from the Post-Dispatch that police had been "called" to the three clubs more than 165 times. As we mistakenly inferred, the numbers appearing in today's Post-Dispatch were not "calls" to the clubs but rather the total number of times that police visited the clubs -- for both calls and "self-initiated" stops including everything from police walking foot beats to doing building checks.