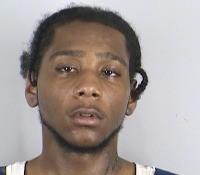 If the producers of Animal House ever decide to do a horror remake of their college hijinks classic, they now have some fodder for the opening scene thanks to 19-year-old Bradley Jamierson.

Jamierson and two others are accused of crashing a frat party at Rockhurst University in Kansas City in just about the worst way imaginable. Police say Jamierson held 40 students at gunpoint, robbed them and then beat the crap out of them for good measure.

That's a tad more egregious than over-pumping the keg, no?

According to the Kansas City Star, the nightmare began around 11:30 p.m. on Saturday night when Jamierson, who reportedly lives about a half-mile away from Rockhurst's chapter of Pi Kappa Alpha, showed up uninvited at their party. He made small talk, left and returned about an hour later with some henchmen.

The Star has the gory details of what happened next:


One victim was knocked unconscious after being pistol-whipped. Another victim suffered chipped teeth. Several other victims suffered cuts that required stitches.

Police said some of the beat-downs appeared to stem from pure spite.

A suspect hit a woman at the party who couldn't lie completely on the floor because there was no room. Her boyfriend told the gunman to stop and tried to explain that she was trying to get down. The gunman then hit her in the head a few more times.

A suspect also put his gun directly next to the ear of a victim and fired at the ceiling, causing the victim to temporarily lose hearing in that ear.

Police arrived just as Jamierson was making a run for it. They identified him by the blood spatters on his white tank-top and found two guns stashed in a nearby trash can.

And just how much did the criminal masterminds make-off with in their heist? According to the Star they netted a whopping $17 and some cell phones.