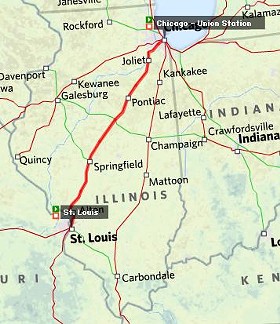 The dream is alive! Construction on a new high-speed rail line between St. Louis and Chicago is set to begin in September and the first 90 miles -- extending from just north of Alton to just south of Lincoln but excluding Springfield -- could be completed as early as December.

The new rails and concrete ties will be able to support trains moving as quickly as 110 miles per hour and, barring delays, will get passengers across the great state of Illinois in just four hours.

The construction will be funded by a $1.1 billion government stimulus grant that was awarded last January and is moving quickly at the behest of President Obama, who wants to prove that the stimulus money is actully being used and isn't part of some evil Socialist plot.

However, it's estimated that the whole 284-mile project will cost an addition $3 billion, and it hasn't yet been revealed where that money is coming from. It also remains to be seen how the railroad will be routed through bigger towns such as Springfield and what will be done about the state's 300 railroad crossings. You don't have to be a high-school SAT-taker to realize that trains moving at 110 miles per hour require a little more warning than trains going a mere 60.

The Illinois Department of Transportation will also need to purchase new cars and locomotives since the ones Amtrak currently uses on the Illinois run are rather elderly and can handle a maximum speed of only 79 miles per hour.

But have no fear. State officials promise the fast trains will run...eventually.