Part One: Get Your Amish Buggy Off the @#&*ing Road 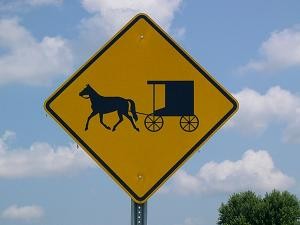 It's that time again. Time for Tuesday Tussle in which Daily RFT writers debate a recent news item or great (or little) importance. This week we explore the case of John V. Rohrer, a 91-year-old man who died last week after being run over by a horse-drawn cart driven by an Amish man.

Rohrer was stepping out of a restaurant June 28 in the town of Arthur in central Illinois when he was hit and knocked over by a horse, and the cart it was pulling ran him over.

Allow me to begin with the only logical conclusion we can all take away from this catastrophe: the Amish need to keep their horse-drawn buggies off the road.

Why? Because they're horse-drawn buggies!

Look, I have no problem with such contraptions (provided you're an actor puttering around Silver Dollar City). But seriously, Amish people, it's time to get the carriages off the roadway -- especially paved roads.

I don't know anything (repeat ANYTHING) about your religion, but isn't the use of paved roads a form of blasphemy for you? Were asphalt roads even invented when time stopped for you?

If you want to ride on gravel roads or even cobblestone roads, fine. But keep off any paved blacktop or poured concrete roadway.

We've already lost a good man in Mr. Rohrer. How many more innocent people have to be run over before you take responsibility for your actions?

Read a counterargument in Part Two of today's Tuesday Tussle.