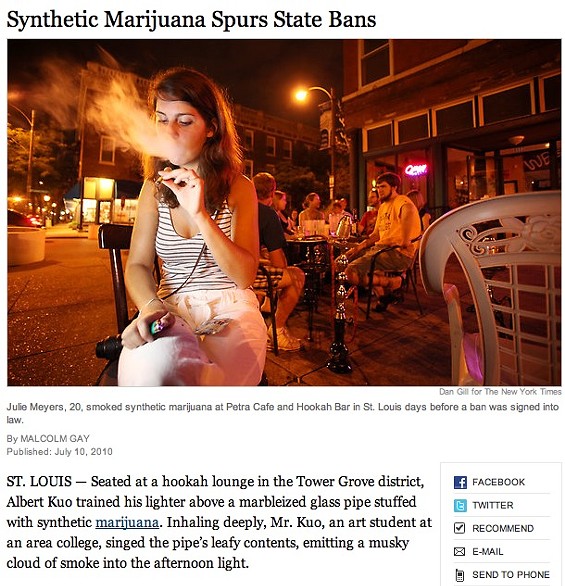 We gave the Times a buzz to ask them about the K2 ads, which appeared twice alongside the article -- and again when we searched for "synthetic marijuana" on the site's search page.

The New York Times uses Google AdWords as sidebar advertisements, which automatically generates ads based on keyword searches that match up with the content of the article.

But isn't advertising something that's illegal or in the process of becoming illegal a little, eh, iffy? Or at least kind of strange for the oh-so-dignified New York Times?
Diane McNulty, New York Times Co.'s executive director of community affairs and media relations, responded:

Google is allowed to contextualize their search ads on our website and geographically target their audience.   If the product offered is illegal or does not comply with our advertising acceptability policies,  we can block the sites.  Several categories of search terms are already blocked, and we periodically add more.
Thanks for bringing the existence of the K2 ads to our attention.  Since the sale of K2 is illegal in the State of New York (and several other jurisdictions), we will be blocking the delivery of Google-provided K2 ads on NYTimes.com.

And, just like that, another search keyword -- and source of revenue for the ailing newspaper industry -- bites the dust.