Valeria Jackson: Jailer Rats Out Her Dad, Says He Encouraged Inmates to Beat Each Other 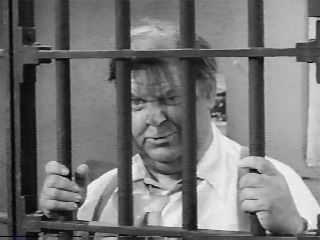 Get arrested in the genteel world of the Andy Griffith Show and you'll spend the night in jail with the friendly and harmless town drunk, Otis Campbell.

Get arrested in the real-life world of rural Potosi, Missouri, and you could spend the night in a cell with a violent predator who jailers and sheriff deputies encourage to beat you up.

That's the allegations being made this week in federal court where former jailer Valeria Wilson Jackson is testifying against her father, Vernon G. Wilson, claiming that as director of the jail dear ol' dad gave cigarettes to a notoriously violent inmate in return for him assaulting other prisoners he didn't like.

Jackson has already pleaded guilty to the same crime, and is hoping her testimony might lessen her sentence.

As the Post-Dispatch recounts today, Jackson testified yesterday in federal court about her father placing a whiny and complaining prisoner in a cell with an inmate identified only as T.M. Minutes later the "complainer" was bruised and battered.

According to Jackson, Wilson -- a Washington County sheriff's deputy who ran the Potosi jail -- then questioned the victim as as he handed cigarettes to T.M. "Did I get my point across?" Wilson allegedly asked.

Jackson also told the court how she placed an inmate who insulted her in a cell with T.M. and then told the pair to "play nice". Moments later the inmate was whisked off to the hospital with the "worst injuries Jackson had ever seen at the jail."

Wilson has not been officially named in federal documents but did plead guilty last year to a misdemeanor charge of third-degree assault and is out on probation.