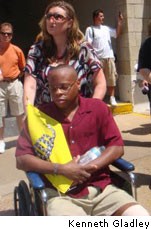 Months and months worth of allegations and bickering could perhaps end this fall when the infamous case of Kenneth Gladney heads to trial October 26.

Gladney, as you'll recall, is the black conservative (and Tea Party sympathizer) who was allegedly beaten by union thugs outside an August 2009 health-care forum hosted by Congressman Russ Carnahan.

Two members of the SEIU union, Elston McCowan and Perry Molens, face misdemeanor charges for allegedly assaulting Gladney as he sold Tea Party swag outside the forum. McGowan and Molens have hired criminal defense attorney Paul D'Agrosa to represent them.

D'Agrosa tells KMOX today that evidence produced in the trial will show that the defendants were two gentleman, one of whom was assaulted while the other provided aid.

"Those people -- I say those people collectively but Mr. Gladney specifically -- got exactly what they wanted: attention to their cause," says D'Agrosa.

One wonder if D'Agrosa will enter into evidence the video clip (now disabled on YouTube) that showed Gladney walking and talking following the attack only for Gladney to reappear at a Tea Party rally a few days later in a wheelchair.