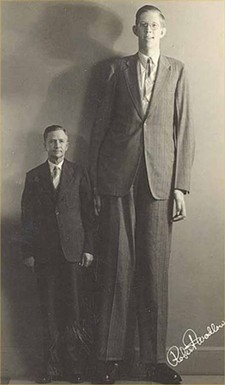 An overactive pituitary gland prompted his tremendous growth and would eventually contribute to his death at the age of 22. Forced to wear leg braces to support his brittle bones, Wadlow was walking in a 4th of July parade in Michigan when he got a blister from one of his braces that produced an infection and fever.

He was returned to his hometown in southwestern Illinois for burial. Forty thousand people came to the visitation and funeral -- events that the Alton Telegraph recalls today as the most well-attended gatherings in the city's history.

Check out a video of Alton's "Gentle Giant" after the jump.