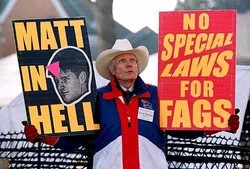 The Rev. Fred Phelp's Westboro Baptist Church is planning to picket outside Busch Stadium this Saturday when the Cardinals are in town to face the Dodgers.

The church announced the protest on its website, calling St. Louis "that evil city with a the giant arch."

While in St. Louis from their home base in Topeka, the church also plans to protest the Lady Gaga concert and the Jewish Community Center.

Following is the church's incredibly lucid and reasoned explanation for picketing the Cardinals game:

You know WBC has spent a lot of time in that evil city with the giant arch. We only want to say that "Your God has seen what you have done. There's nothing new beneath the sun. He's sent a lying spirit down to fool you. We've seen your flags on your crumbling arch. Your filth is not a victory march. God hates your feasts and faithless Hallelujahs." Since you media types like to know precisely why WBC pickets at different locations; how does this work for you?: Missouri passed laws to stop the preaching of WBC, and each of you is individually guilty of that great sin. Our job is to not return your hate with hate, but love - true love - we must come and warn you of what God has in store for you, to wit: 2Chronicles 36:16 But they mocked the messengers of God, and despised his words, and misused his prophets, until the wrath of the LORD arose against his people, till there was no remedy. Praise God when you see that Oil in your river, Missouri! You heard it here, first! AMEN!

Gettin' All Religious Up in Here News Politics