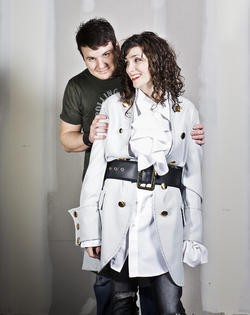 I just got off the phone with Chris Loesch, the husband of Tea Party personality Dana Loesch.

Chris is upset with a post I published yesterday drawing attention to a $2,500 check that Republican candidate Ed Martin's campaign paid to his St. Louis production company, Shock City Studios.

According to Chris, I failed as a journalist for not contacting him before I published the story. (I'll grant him that one. Unfortunately in my job as a blogger -- writing 6-10 posts a day -- I do not have the time to make phone calls for every single topic I cover.)

But that's not the only problem Chris has with my post. Curiously, he's also angry that I got the story right.

My post drew its information from blogger Adam Shriver who on Monday posted a link to the Federal Election Commission filing (page 115) that show the payment Martin's campaign made to Shock City. In his post on St. Louis Acvist Hub, Shriver also mistakenly wrote that Dana co-owns Shock City with her husband. That is not correct.

My post did not repeat that misstatement. I simply said that Chris co-owned the studio and included a link to a story we ran last year in Daily RFT when Chris opened the studio with his business partner, Doug Firley.

According to Chris, I should never have never followed Shriver's story, because he got the ownership of Shock City wrong. To me, though, the story is newsworthy despite the error in Shriver's piece.

Dana Loesch is a quasi-public figure who last week got in a rather public pissing match with G.O.P. candidate John Wayne Tucker over allegations that she has intentionally kept him off her radio show while at the same time inviting Martin onto the program.

The fact that Martin's campaign had paid her husband's studio $2,500 shortly before he appeared on Dana's talk show seemed interesting to me.

"It's a complete non-story," counters Chris Loesch. "Dana did not make one red cent off the work we did for Ed. Adam completely got it wrong, and I'd think you'd want to get it right as a journalist."

Okay. But why was it that Ed Martin chose to use Chris Loesch's studio over all the other production companies in St. Louis? And what exactly did Chris do for Martin?

"We made a YouTube campaign video called "Rubber Stamp Carnahan," explains Chris. "Why did he choose us? Because I've known Ed for two years. I've been going around to campaigns -- just like other studios do -- letting them know what we can offer: film and video, websites, graphics."

Still, one wonders: Don't Chris and Dana -- like most married couples -- share bank accounts? So when one profits, so does the other, right?

"I'm not going to get into my personal life," replies Chris."It's obvious from what you write that you don't like Dana. And that's fine. You keep writing what you do, because whenever you mention her name it's good for us."

"Us?" I ask. "I thought you were two separate entities. Why would it be good for you?"