Why We Should All Be Glad Matt Holliday Bombed 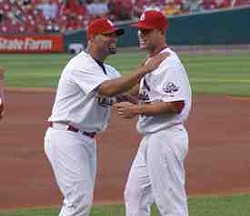 I have to admit, I was sort of rooting against Matt Holliday in last night's Home Run Derby. Not in a "I hope you fail because I hate you, you giant blocky-headed freak" kind of way, mind you. No, more in a "Please Jeebus, don't let this screw Matt up just when he's finally started to really get it going" way.
The Cardinals just can't afford anything else to go wrong for them this season, and seeing Holliday up there hacking away like crazy, trying to knock one out of Angels Stadium (and he actually came pretty close one time), just didn't feel as if it could be anything but another malaise knocking on the door of 2010.
See, I have this irrational fear of the Home Run Derby, honed over years of seeing weird second-half cold snaps and listening to announcers and analysts and, occasionally, the players themselves attribute the problems to participation in the derby. So when I heard Holliday was participating, I wasn't happy or excited. I felt just this nameless, formless dread that one more calamity was going to befall this team.
And really, I feel my paranoia is pretty well justified in this case. After all, this team lost Brad Penny for two months to a two week muscle pull, Kyle Lohse to a wrist issue seen only in Italian motorcycle guys, David Freese to a foot injury suffered while stepping on a base, and our middle infield to a virulent outbreak of acute suckitis. Losing Matt Holliday's production to a mysterious swing ailment would really just be the topper on this bizarre season.
I was ecstatic when Albert Pujols turned down the derby this year; there may not be any actual correlation between his participation in last year's derby and his dropoff in production (by Albert standards, that is), in the second half. But I would much rather not test the hypothesis.
So yes, I was actually pretty pleased when Holliday failed to reach the second round. I'm sure he was disappointed, but I'm okay with that. If he managed to escape the Curse of the Derby by failing to make it out of the first round, that may literally be the best news we've gotten all year.