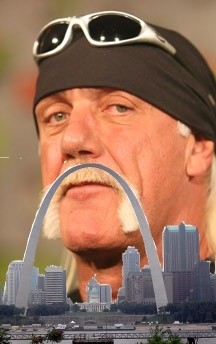 Pretty sure the photo to the right ends the tussle, brother!

But if you wanna be wordy (and a sissy-boy) about it, then here goes: the St. Louis area has been designated SIXTH MANLIEST CITY by an unassailably scientific study. We fully endorse this conclusion. Why?

(Note: Click the following link to read the Tuesday Tussle counter-argument that St. Louis is NOT manly.)

The study cites our fondness for power tools, proliferation of sports teams and sports bars, and the frequency with which we host monster truck rallies.

But yesterday, Daily RFT's Keegan Hamilton wondered aloud: what's the difference between a redneck hoosier and a man's man?

Well, a lot. And St. Louis abounds with both the respectably rugged man's man and the slick, cosmopolitan man's man.

There's nothing manly about missing child support payments, hitting on your cousin, hatin' on minorities or wiping your butt with a dirty sock. Dudes that do those things are called "hoosiers," and St. Louis definitely has 'em.

But we also have the real deal: labor union dudes as strong as oxen; battle-hardened veterans from decades of wars, police officers who take no guff and firemen who laugh at flames. I mean, we have the American Moustache Institute for chrissakes. We bring the man's man. Don't doubt it.

Know this guy? Yeah. It's Mad Men's Don Draper, played by St. Louis' own Jon Hamm. This is a man who drinks scotch and smokes cigarettes at about, I don't know, TEN IN THE MORNING. Meanwhile, he's a wily ad genius.

He yells at his children when they act like schmucks, and never shows his wife an ounce of vulnerability, even though she's the most beautiful woman on TV and could reduce lesser dudes to sputtering globs of oatmeal.

Where do you think Hamm got the real-life inspiration to play this role so well? Think about it. Hint: It's not Kansas City or Chicago.